Today's Angel is little Charlie Mahon.  He and his twin sister were born just six months ago.  Stories of twins especially tug at my heart, particularly when one of the twins doesn't get to stay on earth for very long.  There is a very special bond between twins, and I don't think death changes that.  My sweet twin daughter, Amy, introduced me to this wonderful family, and they will be dove releasers at the 13th annual Running with Angels 5K this year on May 20th.

Here is the story of the Mahon family, as told by Mama Mandy:

Things I want most in my life always take a lot longer than I imagined they would.  Which makes me appreciate them so much more.  I met the love of my life Richard when I was 30.  We met online and when we met in person, which took a while since he lived in England at the time, we both knew we were meant for each other.   A few months into our marriage we knew that we wanted to have a family.  We did get pregnant but quickly learned that the HCG levels were going down and I miscarried.  This was very difficult for our family but we felt hopeful that I was able to get pregnant.  After trying for a few years we decided to look into fertility treatment.  We soon found out that I have PCOS and don’t ovulate on my own.  We started the fertility treatment of Clomid, HCG Trigger shot and Progesterone and on our fifth attempt we found out that I was PREGNANT!!  We were so excited we could hardly stand it.

A few months into the pregnancy we found out that we were having Twins!  We felt incredibly blessed since this pregnancy was not easy on me being 37 and overweight I only had to do it once.  Then we found out that we were having a boy and a girl which was even more exciting to have one of each.  Richard decided that their names needed to be Pirate Ranger for the boy and Viking Destroyer for the girl.  I told him that he was welcome to call them that but I wanted their names to be Charlie and Rosie, which he agreed were perfect names.

The pregnancy went well, I was considered high risk so we did multiple ultra sounds at the hospital and everything looked good.  Around week 29 they were concerned with Rosie’s head shape and thought she may have Craniosynostosis and kept an eye on it the next few weeks.  On September 15, 2016 (week 31) during an ultrasound Rosie’s head looked great which we were relieved but the doctor discovered that Charlie was showing signs of having Downs Syndrome.  We went and had the blood test to determine this.  A few days later the results came back and Charlie did have Downs syndrome.  I felt at peace about this and thankful to have this blessing in my life.  I knew it would be tough but so rewarding.

On September 21, 2016 we went in for our next ultrasound and the doctor discovered that Charlie had some fluid buildup in his body.  She seemed concerned about this and wanted to check on it the next day.   The next day the fluid buildup was getting worse so they admitted me to the hospital.  During the next 2 days they monitored the babies’ heartbeat and decided that they needed to take the babies out to save Charlie.  The doctor told me that Rosie would be okay coming out early to save her brother.  They scheduled the C-section for Friday, September 23.  Charlie was born with Rosie following a few minutes later. 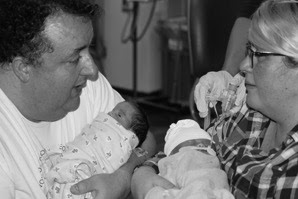 Charlie was immediately rushed to the intensive portion of the NICU with his little sister Rosie next to him.  Upon birth it was discovered that Charlie was a very sick little boy.  Not only did he have Down syndrome but he had High Drops, a hole in his heart, and Jeune syndrome which is a rare genetic disorder that affects the way a child’s cartilage and bones develop.  The nicu doctors at UVRMC worked around the clock to help Charlie.  They were AMAZING!!!!  We were very hopeful and trusting that these doctors performed miracles every day and that our little Charlie would be very sick but still with us.  The next few days that followed we started to realize that our sweet angel baby Charlie was much sicker than we ever could have imagined.  On Friday, September 30 the doctor on duty informed Richard that Charlie was close to passing and wanted to see what we wanted to do.  We decided to let Charlie pass peacefully in our arms.  We were able to hold our sweet boy for the first time and get some beloved family photos with the four of us.  Close family and friends came to say their goodbyes to Charlie and he slipped away peacefully in our arms on Saturday, October 1. 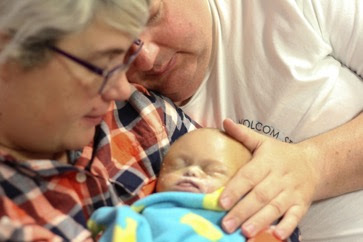 Charles Spencer Mahon was a fighter from the day he was born.  It is a miracle that he lasted 8 days.  We feel like he wanted to stay on this earth but Heavenly Father had a different plan for him.  Now Rosie has an incredibly protective angel brother watching over her always.  We love our little Charlie angel and feel blessed to have been able to spend a few days with him.  We look forward to the day we can be with him again.

Posted by Pamela Hansen Running with Angels at 6:46 PM